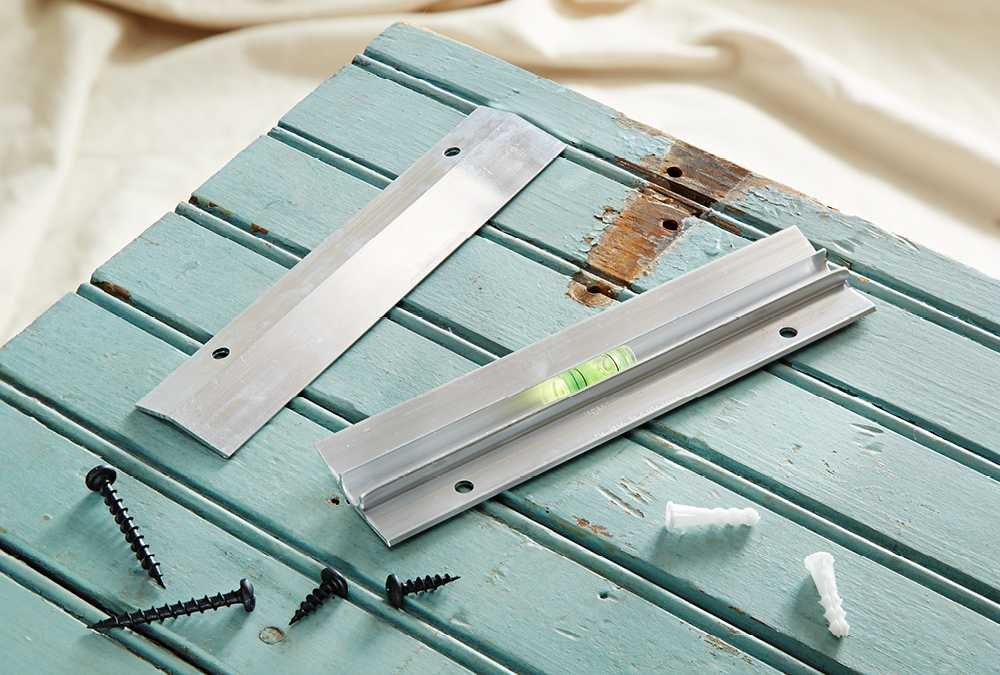 When working on the Holiday Guest Bedroom, we needed to hang a series of three salvaged cabinet doors on the wall as a decorative element.

Becky said to me, “How are we going to hang these, Dennis?” Without hesitation, I said “With French cleats.” She promptly responded “French what?”

If you look it up, you’ll see that they are sometimes called French cleat wedge brackets. They are simply a length of dimensional lumber ripped in half at a 45-degree angle, or two pieces ripped at 45 degrees on the long edge of the lumber. One piece is attached to the wall, and the other is attached to the piece being hung. When the two pieces come together, they “wedge” and form a snug fit to the wall.

The French cleat can be used for a variety of reasons. We chose them because the cabinet doors have some weight to them. Also, Becky thought she might hang something decorative on one or more of the doors, which would add even more weight. And here’s another reason to use this approach: The doors needed to be equally spaced. With these cleats, we were able to slide them left and right to fine-tune the fit.

Cutting dimensional lumber at a 45-degree angle on a table saw requires some DIY experience and confidence. If you don’t think you quite fit that description, you have options. We decided to use Hangman brackets purchased at a local home center. They are inexpensive, easy to install, and work just as well as the dimensional lumber mentioned above. As an added bonus, these brackets come with a bubble level to aid in attaching them level to the wall.

To install, we centered the half bracket that angles downward on the back of the cabinet door and attached it using the included screws. Next, we attached the other half to the wall using the included level. You’re probably wondering why the bracket is attached to a block of wood and then attached to the wall. You can certainly attach it directly to the wall. We chose to add the wood block because it created some depth between the wall and the cabinet door and allowed us to drive two screws directly into wall studs. Since we added this block, we also added a similar block to the bottom of the cabinet door so that it is evenly spaced on the top and bottom.

So the next time you want to hang something on the wall and you are concerned a regular wall hanger might not be enough, consider a French cleat.